Skip to content
September 3, 2019May 20, 2020 mikomikisomi
Since I recently released a dress-up game in Ren’Py, I thought I’d make a write up on how it was done! Since Ren’Py can now (mostly) port to web, it’s a decent choice for making standalone dress-up games or having a cute little minigame in your visual novel.

Hint: The majority of the time was spent on the art. Here’s the game I made in it, playable in browser.
​

Here’s what you’ll need to make your own dress-up game!
​
Tools: 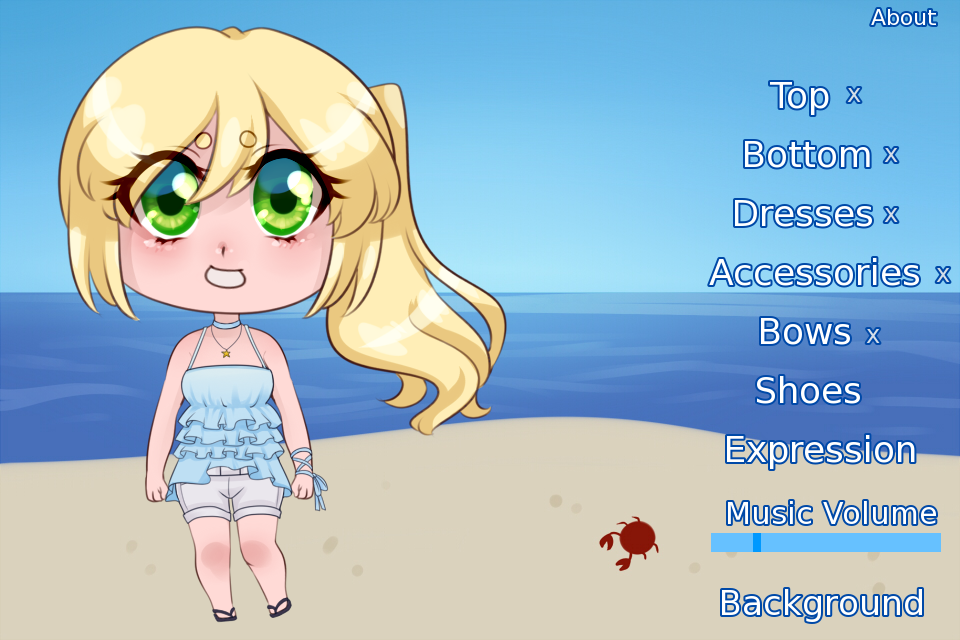 To start, get your base and clothes ready. For the purposes of this tutorial, I’ll provide a few screenshots and such of my structuring. Here’s an example of a character base (left) and a clothing item (right). Note: I keep the clothes the exact same size as the character base so I don’t have to deal with setting exact x/yalign in Ren’Py.
​
To make the options, we’re going to make textbuttons! So, create a new projects and open up screens.rpy.

Now we’re going to start coding the top textbutton which will let us cycle through the shirt options in screens.rpy. NOTE: Please name your images in a pattern, such as “top1”, “top2”, “top3”, etc. It makes it SO much easier!

Now we need to actually show the tops! We can do this multiple ways- I’ll go over the simpler way first.

Here’s a bigger example of what it all should look like (with both examples of how to display the images):

And that’s pretty much the basics for making a dress-up game in Ren’Py! Remember that when you’re showing the images that the further down on the screen they are, the more “on top” they’ll be ingame- i.e., we put the background as the very first image added on the screen since it needed to be the furthest away one.

There’s still a lot of things you can add such as an About button for the About menu, a music slider, etc, so I’ll go over a couple of those here as well.