Marketing is something you should be doing constantly while a game is in development- but at what point is it too late to start?

If you remember one thing from my articles, remember this- marketing should be seen as an integral part of game dev, much like programming and visuals, and should be done all during and after development. However, there will always be cases where people didn’t market their games or crowdfunding projects enough- as sad as these are, a lot of times they simply won’t be able to recover from that loss of a major amount of sales on launch. So, at what point does it become too late to start marketing and it become better to delay a launch?

Let’s look at crowdfunding first. Most people who’ve looked into Kickstarter have probably heard that you need to get 30% of your goal in the first 48 hours, and a recent study has found that to be pretty true. So what does that mean? It means that the biggest push of pledges needs to be at launch. Therefore, starting to market after the Kickstarter launch would be extremely detrimental to the campaign. 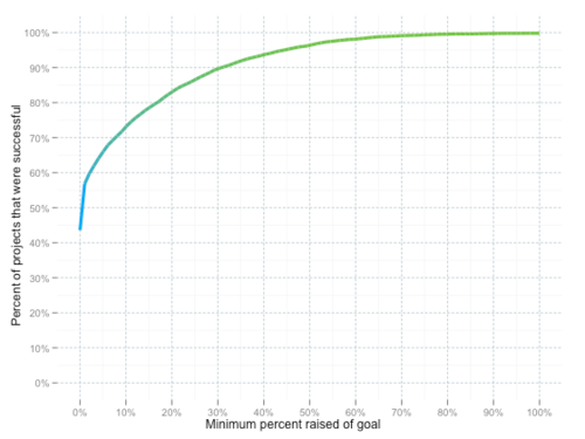 A graph from Kickstarter themselves in 2011.
​Your game launch isn’t much different. According to a Gamasutra post by Jake Birkett, the average amount of sales on Steam is around 58% of your wishlist numbers- what this means is that if you have 200 wishlists then you can expect to sell around 100 units on launch week. As Simon Carless went over recently in his own Gamasutra post, wishlist counts have become an exceedingly reliable way of telling how well a game will sell after launch.
​

What does this tell us? It tells us that collecting wishlists (for games being sold on Steam) is a good way to not only get people to be notified about the game on launch but is also a good indicator of how well the game will sell. This also means that we need to focus on driving wishlists (or maybe newsletter subscriptions for a non-Steam platform) before the game releases.
​

Make it a goal to gain wishlists months before launch.

Let’s do some further math. At the time of writing this (yes, I just checked), Asterism gets around 4-6~ wishlists a day on Steam.

With this context, we can reasonably assume that the amount of passive daily wishlists will increase once there’s a demo released (which will lead to let’s plays and journal coverage) and the project is being worked on more frequently.

Each week Asterism currently gets around 36~ wishlists. This means that, if it kept up this rate, in a year…

36 x 52 = 1872
…Asterism would have an additional 1800~ wishlists. Not great, considering the game (hopefully!) won’t take that long to complete and when you see the results from the Gamasutra articles. But like I said, this number should increase with more coverage, a demo, etc.Let’s say that each week Asterism will gain around 50 wishlists. If this is the average rate, then in a year…
50 x 52 = 2600
…Asterism would have around an additional 2600~ wishlists. It’s looking somewhat better, but not by too much again considering the game most likely won’t be sitting there raking in wishlists for another year.So what does this tell us? Put Steam pages / Newsletter signups when you can. Start gaining those leads early and collecting them over the entire development process.
​

What point is too late to start marketing?

Games have different development cycles and time lengths- I’ve released games that took 48 hours and some that took 8 months. Therefore, I find it hard to give a sure timeframe in months or such, but I’d say you should stop what you’re doing if you’re 2/3rds of the way through development and have not set up store pages, social media, etc.​If your game will take you about 8 months to develop, you should consider halting progress to give time to properly market the game if you’re 2 months from launch and haven’t started at all- sometimes slowing a project in order to get the word out about the project.

In recap… start collecting wishlists early and give yourself time to tell the world about your game!

Wishlist my game on Steam!